The cold Atlantic coastline is host to an array of adventures for every traveller to delight in.

The number one attraction of the Namibian coast is undoubtedly its reputation for excellent rock and surf angling, shark and ski-boat angling. Galjoen tops the list of sought- after species, while kob (kabeljou), West Coast steenbras and blacktail are also popular species. Late summer is generally the most rewarding months for angling.

Snoek and yellowtail are the most common species targeted by ski- boat anglers. White stumpnose, geelbek and elf (also known as shad) are other species to be caught. November to March are usually the most productive months.

The coast also offers excellent shark angling opportunities from mid- December to mid-June. The bronzy, or copper shark, is renowned for its fighting spirit. Weighing up to 180kg, it is the main target of shark anglers. Cow shark, spotted gully shark and the hound shark are other species caught. Most shark angling operators support catch and release.

The Zambezi and Okavango rivers in northeastern Namibia are home to no fewer than 76 fish species, including several fine angling species. Heading the list is the rapacious tiger fish, while bream, three-spot tilapia,nembwe and pink happy also rank high on the catch list.

Hardap Dam north of Mariental, the Von Bach Dam near Okahandja and the Naute Dam west of Keetmanshoop are popular dams with freshwater angling enthusiasts. Large- and small-mouth bass, yellowfish, carp, Mozambique tilapia and barbell are the most commonly caught species. Tour operators can put visitors in touch with clubs and expert fishermen.

The fresh southwesterly winds along the coast create the ideal conditions for kite- and wind-surfing. The Walvis Bay Lagoon and the Jetty area in Swakopmund are popular, but it is the perfect conditions at Lüderitz that attracts kite- and wind-surfers from around the world to this southern coastal town where the world-speed record for kite surfing is challenged annually in November.

The discovery of the best left-breaks and one of the longest tube rides at Donkey Bay off Pelican Point in the world in 2008 put Namibia on the world surfing map. It is renowned for its barrels that can be surfed for close to a kilometres and the incredible speed of the waves. In Swakopmund north of the Mole is a popular surf spot and further north along the coast, at the Cape Cross Seal Reserve there are also good left-breaks when the swell is good.

The Orange River has been a popular destination for canoeing trips which are offered by several companies. Trips lasting between four and six days start a few kilometres downstream of Noordoewer and end at Aussenkehr or continue some 20 km further downstream.

A sea kayak is without doubt the best way to explore the Walvis Bay Lagoon. Kayaking on the lagoon, you will get real close up views of Cape fur seals as they play around the kayak and you might also see Heaviside’s dolphins. No experience is required as the kayaks are very stable. Cruises from the harbour provide ample opportunity for close-ups of seals, dolphins and sea birds.

Go on a water adventure! 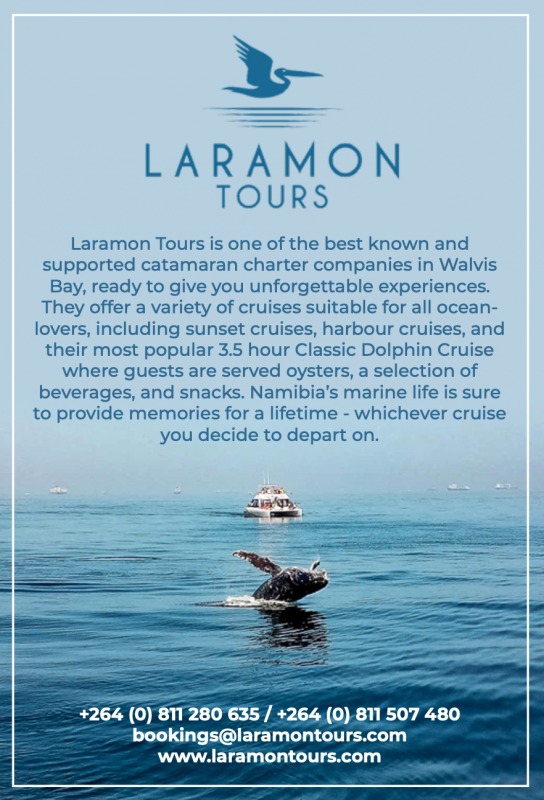