The ever-changing desert scenery makes for a spiritual journey

With its almost limitless gravel plains, rolling dunes, ancient rivers and extremely low population, travelling to Namibia’s south transports you to a magical place where existence is unhurried and time is relative. Our mind is able to be idle and free itself from its daily burden of over-stimulation. We can reconnect with what makes us human: our soul.

The wonders of this region come in many shapes and forms. In the furthest reaches of the south is an immense canyon formed over hundreds of millions of years through tectonic movement and perpetual erosion. This geological wonder is so vast that it induces a strange but comforting feeling of insignificance. It provides a new perspective on our lives and daily routines when considering the time it took to create this massive crack in the earth.

The southern border of Namibia is an ancient river. One of the longest in Africa, the Orange River winds its way through a desolate and forbidding landscape where an amazing array of fauna and flora survives in harsh conditions. Perfectly adapted to find sustenance in an unwelcoming land where very few humans have had the courage to make a permanent home. The only perennial river in the area, it cuts its way through inhospitable and mountainous terrain before eventually emptying into the Atlantic Ocean. At the river mouth is one of Namibia’s most important wetlands, surrounded by a sea of sand. A miniature paradise that attracts a wide variety of birds, mammals and fish.

The Orange River not only creates a nutrient-rich environment for wildlife to thrive but over the millennia has transported riches of material value. It carried diamonds over hundreds of kilometres before finally depositing them in the ocean, from where they were spread northward by strong currents and washed ashore. These gemstones brought extraordinary opulence to a tiny settlement that only existed thanks to the natural harbour it overlooked. The short-lived diamond rush caused small mining towns to pop up in an unforgiving desert. They were abandoned as soon as the mineral riches had been exhausted. The desert reclaimed its territory leaving only ghost towns and the remains of large contraptions once used to sift for diamonds. A stark reminder of the power of the desert and human greed for worldly wealth.

The perception of what might seem like a featureless landscape quickly changes as the hidden gems, treasures and secrets of the southern landscape are gradually revealed. From boulders stacked on top of each other almost like cairns placed there by some giant, as a not so subtle hint that these mythical creatures roamed the earth before us, to a ‘forest’ of quiver trees, the only known site where these alien-like aloes grow together in such close proximity. Gross Brukkaros, the inselberg which looks like a volcanic crater, towers above its utterly flat surroundings of the central-south, another of the many fascinating geological features in a land that time forgot.

The south-western Namib Desert, which may seem like a wasteland to some, has become synonymous with conservation. It only took one visionary to see the potential in failing and struggling commercial sheep farms bordering Namib-Naukluft National Park, an area where unreliable rain made farming unsustainable. The vision has blossomed into one of the largest private nature reserves in southern Africa, characterised by distinct habitats of dunes, sandy plains, inselbergs, mountains and gravel plains. Devoid of fences, wildlife like gemsbok, springbok and other hardy desert dwellers are able to freely follow seasonal migratory routes. As it was before human intervention.

The infinite space of the south-western Namib evokes an almost indescribable sense of place and is the reason why thousands of tourists make the pilgrimage to this region every year. Travelling on endless gravel roads surrounded by vast expanses of ever-changing desert scenery make for a spiritual journey in itself. Feet buried in the crest of a sand dune while watching the sunrise with no one else, no buildings or other signs of civilisation in sight, allows for the connection to mother nature that as humans we long for. The far horizons and ancient landscape somehow help us to make sense of the often confusing and complicated world we live in.

The true essence of the south is not only its striking landscape but also the opportunity to disconnect from daily life and get fully immersed in the experience of every sensation. What you see, smell, feel, hear and touch. Run your fingers over ancient rock formations. Listen to the chorus of barking geckos as the sun sets. Allow the mind to be carried away on the wave of overwhelming silence that the desert night brings. Stare into a fire and relax after a long day’s exploring, and marvel at the glittering night sky above. Feel an inner peace that you’ll find nowhere else. Clear the mind, slow down, let the south evoke the deep emotions you forgot about and rediscover your soulful side.

/Ai/Ais – Richtersveld Transfrontier Park (ARTFP) is a joint initiative by Namibia and South Africa to conserve an extensive part of the Succulent Karoo biome. Although seemingly desolate and devoid of life, it is an international biodiversity hotspot. One-third of the world’s 10 000 succulent species are found within the borders of the 5 920 km2 park, with new species still being discovered. The transfrontier park includes /Ai-/Ais hot springs, the Fish River Canyon, and part of the Orange River and the Richtersveld World Heritage Site in South Africa. Furthermore, 56 species of mammals and at least 194 species of birds occur in the ARTFP.

Diamonds were discovered near Lüderitz in 1908 and quickly attracted fortune seekers from across the globe. The rich alluvial deposits caused various small mining towns to pop up in the desert, the most famous and opulent being Kolmanskop some 10 km east of Lüderitz. In the first six years of mining, an incredible five million carats of diamonds were extracted. The onset of the First World War brought an end to the great diamond rush. Mining operations still continued at some of the settlements but they were all abandoned by the mid-1940s, leaving only ghost towns to be slowly reclaimed by the desert sands.

Bogenfels is an imposing rock arch that stretches into the ocean at a seemingly impossible angle. At 55 metres high, the dramatic limestone arch standing with one leg in the sea and one on land, is much larger than it appears in photographs.

With a size of 200 000 hectares, NamibRand is one of the largest private nature reserves in southern Africa. It consists of a number of former sheep farms and shares a 100 km border with Namib- Naukluft National Park in the west. The nature reserve was created to protect and conserve the sensitive biodiversity on the eastern fringe of the Namib Desert. All the fences were removed in order to facilitate seasonal wildlife migration of mainly gemsbok and springbok. Apart from practising low-impact sustainable tourism NamibRand has been designated a Gold Tier International Dark Sky Reserve by the International Dark Sky Association and houses the NamibRand Desert Research and Awareness Centre as well as the Namib Desert Environmental Education Trust.

The quiver tree (Aloidendron dichotomum) in fact is not a tree but an aloe and mainly grows on rocky slopes and hilltops in the central-west and in the south of Namibia. Its name originates from the San culture. San hunters used its branches as quivers for their arrows. The Quiver Tree Forest, situated on a farm 13 km northeast of Keetmanshoop, is a national monument. Normally growing some distance apart, there a large number of quiver trees stand in uncharacteristically close proximity, reminiscent of a forest.

Tsau //Khaeb National Park was proclaimed in 2008. Previously it was known as the Sperrgebiet, German for restricted area. When diamonds were discovered in the area more than a century ago, the German colonial authorities of the time decreed a no-go zone to control exploitation of the mineral wealth. Although access is still restricted and most of the park is underdeveloped, its dormant state created a sanctuary for plants and animals to thrive in the sensitive desert landscape. Concessions to areas like Bogenfels and some of the ghost towns allow visitors to experience the untouched beauty of the park.

The Fish River Canyon, the world’s second largest natural canyon, is part of /Ai/Ais – Richtersveld Transfrontier Park. Formed as a result of tectonic movement and hundreds of millions of years of erosion, the canyon today measures 550 metres at its deepest point and is up to 27 km wide. Hiking the 160 km length of the canyon takes five to six days and is rated one of the best hikes in southern Africa. The hike, and the Fish River Canyon, end at the sulphurous hot springs of /Ai-/Ais. 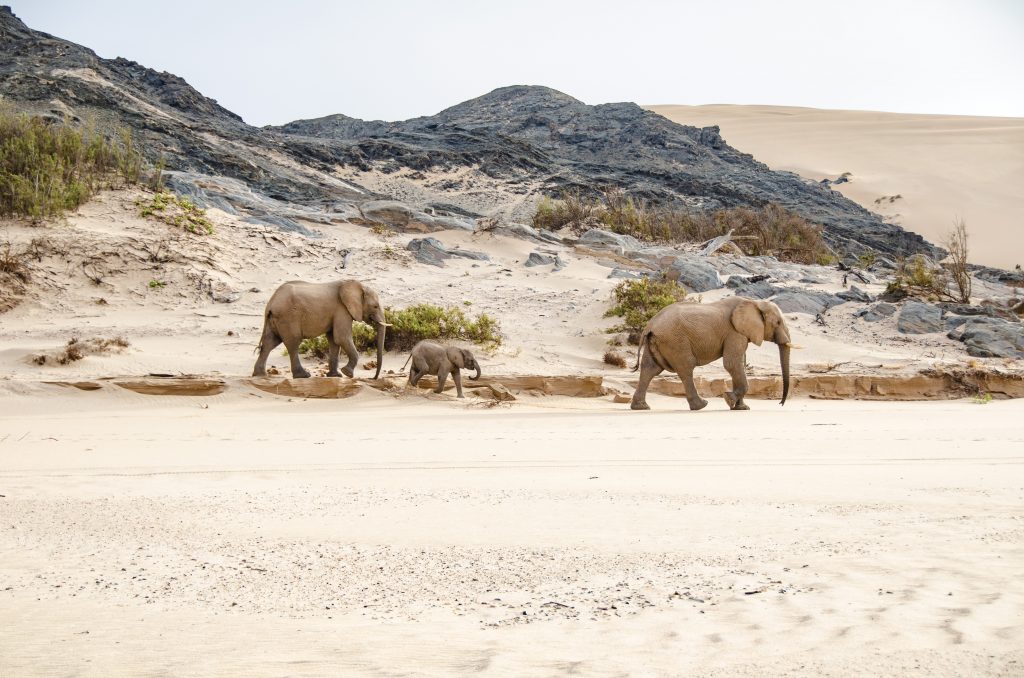