Ideal atmospheric conditions over much of Namibia offer opportunities for a variety of air adventures.

Drifting silently over the Namib in a hot-air balloon is an experience that is not easily forgotten. As you float gently up, you will enjoy a bird’s-eye view of the desert plains, dunes and inselbergs. Preparations for the flight begins before sunrise and the flight takes off around sunrise when there is normally little wind. Namib Sky Balloon Safaris, the company which pioneered balloon safaris in Namibia in 1991operates from its launch site south of Sesriem. After riding the winds for about an hour it’s unfortunately time to return to Mother Earth where you are spoiled with a scrumptious sparkling wine breakfast. Hot Air Ballooning, based at Swakopmund, operates flights behind the dune belt throughout the year, while Samawati operates flights over the Tsondab Vlei area from its base near Solitaire. All balloon flights are subject to weather conditions.

Bitterwasser, north of Mariental, has an international reputation for soaring and several world records have been set there. Situated at an altitude of 1,250 m, the area has excellent thermals, a climbing rate of 3 m to 7 m per second, sunny skies and visibility of up to 200 km. Between October and January each year, Bitterwasser becomes a hive of activity as an international array of gliding pilots gather there. Five flights of over 1 300 km and 210 flights of over 1 000 km have been recorded, while a total of 590 000 km has been flown since records have been kept. Numerous international records have been set at Bitterwasser. There are soaring opportunities on private farms, but these are normally used by associations that book in advance.

Plummeting at a speed of up to 200 km/h towards earth during a 35 second tandem parachute jump is for some adventure seekers the ultimate adrenaline rush. Once the parachute opens you will enjoy the magnificent scenery of the Namib dunes, Swakopmund and the ocean as you drift down to the landing zone. Ground Rush Adventures offers the highest tandem jump in Africa (15 000 feet), as well as jumps from 12 000 feet and a standard jump. After completing a six- hour course you can also do a 3 000 feet static line jump.

Several companies at Swakopmund and Walvis Bay offer scenic flights along the coast. Day excursions are also offered further afield to attractions such as Sossusvlei, the Fish River Canyon, Damaraland and even as far north as the Kunene River.

Go on a balloon adventure! 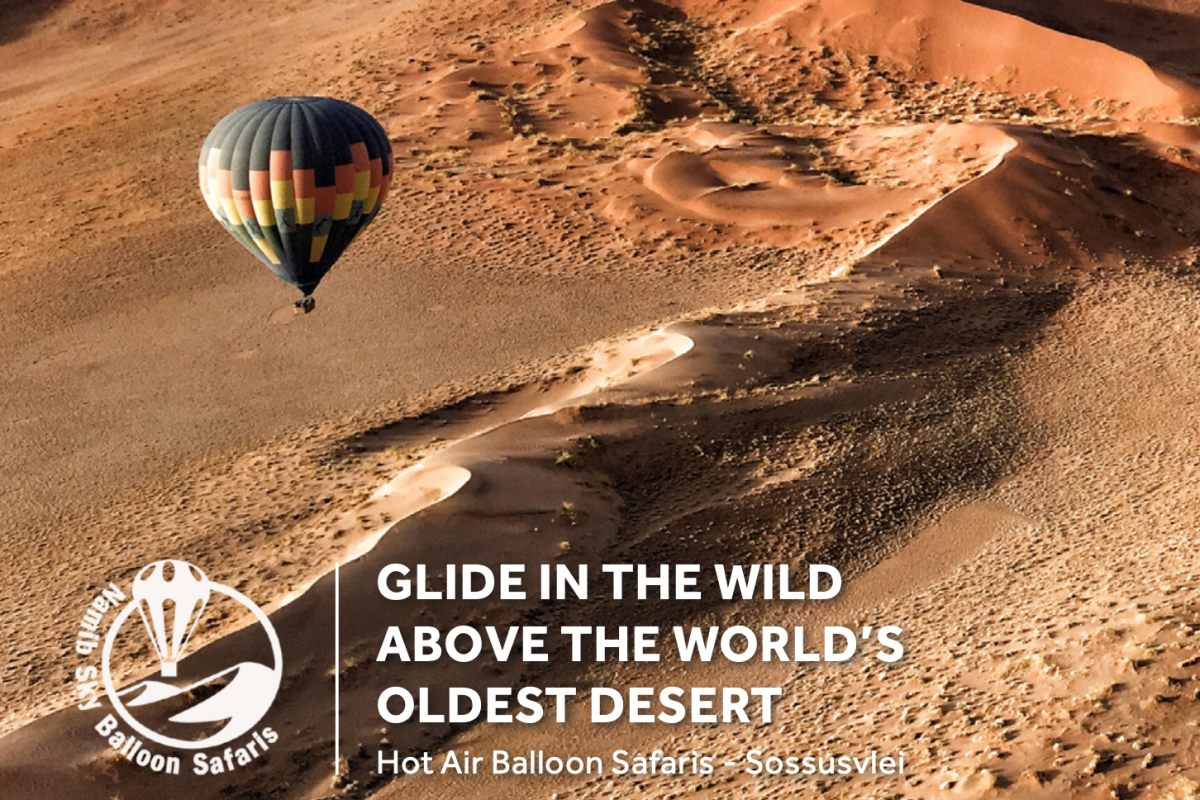