Formerly referred to as the Caprivi, the Zambezi Region is a fertile wilderness of riverine forests, flood plains, swamps and open woodland created by a complex network of rivers and relatively high summer rainfall. For freshwater angling enthusiasts, canoeists and white-river rafters, Zambezi offers much excitement and challenge.

Well over 400 of Namibia’s bird species occur in this part of the country, and the region is steadily gaining a reputation as a retreat for bird-watchers, nature lovers and specialist travellers. It is also of growing interest to scientists studying the wetlands system and its flora and fauna.

Formerly known as Itenga, Zambezi was ruled by the Lozi kings until it became part of the British Protectorate of Bechuanaland, today’s Botswana. In 1890, at the Berlin Conference, Germany acquired the territory, named it after the German Chancellor General Count Georg Leo von Caprivi, and added it to German South West Africa. The capital of the then Caprivi was Schuckmannsburg (renamed as Luhonono in 2013) until about 1933, when it was moved to Katima Mulilo, a name that means â€˜put out the fire. Katima Mulilo has since become a busy tourist centre and gateway to Victoria Falls in Zimbabwe and the Chobe National Park in Botswana.

Travelling from Ngoma on the B8, a 64-km stretch takes visitors along the Chobe River to Impalila Island, from where a high lookout point offers views of Namibia, Zambia, Botswana and Zimbabwe. The link for these attractions is the 500-kilometre TransCaprivi Highway, a wide, tarred road that has replaced the dusty gravel tracks of the past. The route runs through a region of which one third is a floodplain, and where the population is small and the human impact limited. Providing access to three state-protected game reserves, it lies in the geographic heart of the Kavango-Zambezi (KaZa) Transfrontier Conservation Area. Read more on KaZa further down in this section.

The largest town in Zambezi, Katima Mulilo, lies on the banks of the Zambezi River, at the crossroads of Namibia, Zambia, Zimbabwe, Botswana and Angola. It beats with the pulse of Africa and is a microcosm of Zambezi, a place where seven different languages and many more dialects are spoken, with traditional villages bordering the town and open markets resonating with more modern conveniences.

Dirt tracks and freshly paved roads in the centre of Katima Mulilo lead you to a mixture of old and new shops, banks and small businesses. An interesting feature of the town is the water-flushing public toilet housed in the hollowed-out trunk of an ancient baobab tree. In the centre of Katima Mulilo a large, vibrant African market provides a glimpse into the daily lives of Namibians in this lively town.

Zambezi pots and baskets are noted for their distinctive beauty and symmetry. The fine workmanship of the Caprivians can be seen in the crafts offered for sale at several outlets, including the Caprivi Art Centre, situated next to the hospital in Katima Mulilo; the Katima Craft Centre next to the open market in Katima Mulilo; the Ngoma Crafts Centre near the Ngoma border post where travellers cross into Botswana; the Mashi Crafts at Kongola in East Zambezi; and at the Lizauli Traditional Village, where a programme of traditional music and dance gives visitors an insight into Caprivian culture.

The Zambezi Waterfront Tourism Project on the banks of the Zambezi River is a government initiative aimed at stimulating socioeconomic development. In addition to providing accommodation, it also promotes community tourism through cultural activities such as traditional dances, woodcarving, weaving and basketry.

Tutwa Tourism and Travel provides information on the region and organises activities and tours. The Baobab Bistro is a great place for a meal, and also provides information on what to see and do in the area. If you’re looking for entertainment on the banks of the Zambezi River, Bezi Bar is a favoured hangout for locals and visitors alike.

The Katima Mulilo Airport is situated 20 km outside the town within two hoursâ€™ drive from Victoria Falls and not more than four hours drive from the Okavango Delta in Botswana. Air Namibia offers flights to Katima Mulilo four times a week.

from kavango, zambezi and surroundings 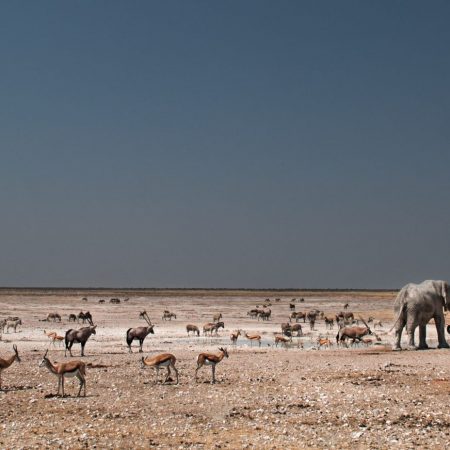 to explore before you go